The Beachcombers
by Richard Herbst - Copyright 2008

Once the long, green and golden days of summer finally retreated and gave it up to the Apology of Fall and the Sentence of Winter, the beaches became a desert that only a few ventured upon. Every mile or so you could see surf-casters in thigh-high boots with heavy tackle hopefully fishing for stripers or fluke or whatever else would bite beneath the gray foam that rode behindthe waves. I never saw one catch a fish and I wasn't entirely sure that that was why they came. Tales persisted of German submarines

being spotted off the Rockaways.  Maybe the surf casters were Gestapo agents exchanging messages with U-Boat commanders, but I never saw a submarine, either. Occasionally Fire Island would surface on a really clear day as the garbage scows made their daily trips out.

The surf-casters bought their gear from Marty's Fishing Tackle shop on Mott Avenue, next to the barber shop. Marty's also happened to be where my friends and I bought our model airplanes and where, if our cajoling was any good, we got our fathers to buy an engine for the larger models. Marty always wore plaid shirts and khaki pants and seemed to be a castaway of some kind who worked in the shop making and mending fishing rods under the strict supervision of his father who always called him Martin. There was no possibility of there being a Mrs. Marty. His world was the tackle shop and an infinite knowledge of the shelves and counters. These were filled with Penn and Ocean City reels which the fishermen eschewed, along with incredibly painted lures. In the Spring, bundles of bamboo would appear to welcome the porgies. One day Martin's father didn't come to the tackle shop any more and it soon closed.

The beach was also home to legions of roving beachcombers armed with shovels, pails and strainers, who busily sifted the now-cold holiday sands for coins and trinkets left behind by the Summer People. In my wanderings from boardwalk shadows to low tide on the jetty I befriended a regular named Saul who patiently sifted Rockaway's Klondike for nuggets which he carried in a pail.

Saul didn't seem to mind my tag-along presence. He had very little to say and what did come out in short grunts revealed that he wasn't very bright. He obviously couldn't tell or appreciate jokes, but all children are instantly aware of those who are “blessed” and they make allowances. Saul was as permanent as the sand he foraged yet I regarded him as a very large child that someone obviously took care of. He combed near the boardwalk but not under it. There were beachcombers who dug deep next to the concrete pilings but not Saul who preferred the light. He avoided the Mermaid's Purses and  horseshoe crab skeletons that littered the high-tide mark; these were my treasures, along with the driftwood, the occasional clumps of tar and seaweed, now-and-again dead fish that the seagulls had missed... 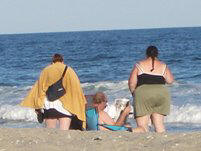 I imagined, in flashes, the cavorting families on their blankets who came to the beach loaded with food, beer, drinks and suntan lotion, and invariably left in the afternoon reddened by the sun, marked for days as they resumed their migratory, beachless lives in Brooklyn, Queens or the Bronx. The fatter, the more likely they were to lose coins, watches and silverware in the hot sand, and some of them were very, very fat.

What obscure promise brought them to the summer's beach I'll never know, but Saul was there in February's wind and gray sky to clean up their leavings. And I was there like a hovering gull.