"Still Pitching " a memoir about my years at Far Rockaway High--in which Earl Jagust and Coach Kerchman are prominent figures--is now available as an ebook.  The hardbound edition won the ForeWord Magazine 2003 Independent Press Memoir of the Year. You find it on Amazon, Dzanc Books, Kobo Books and Barnes and Noble

Click Here For A Review by the Rockaway Wave Newspaper

February 8, 2005 - Congratulations to Michael Steinberg, Class of 1958 for the following recognition received for his wonderful book, Still Pitching.”

In June, 2004, ForeWord Magazine chose Michael's memoir, Still Pitching (Michigan State University Pres), as the Small and Independent Press Memoir/Autobiography of the year. ForeWord's annual Book of the Year Award was established to bring increased attention from librarians and booksellers to the literary achievements of independent publishers and their authors.
Also, in September, the Association of American University Presses recently chose Still Pitching for inclusion on its 2004 list of "Books Selected for School Libraries."
And in October, the Melton Center for Jewish Studies chose Still Pitching for inclusion in a comprehensive bibliography of books called "The American Jewish Story in Print," a national on-line directory of resources. 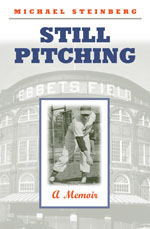 Still Pitching is a memoir written by one of our own, Michael Steinberg, Class of 1958.  It's about growing up in Rockaway in the 50s.  At least half is about the author's four years (1954-58) at FRHS.  Michael's bio is located at http://www.mjsteinberg.net.I have already heard from a few grads who have completed reading Michael's work.  Bob Natt, Class of 1965 writes the following:

Skip,  This book must be considered required reading for every FRHS alumnus.  The description of the favorite haunts, the State Diner, Cairo's, Falcaros, etc. are fantastic.  Anyone who had gone to FRHS during Jack Kerchman's tenure will not want to miss getting this book.  How can we get this to be a movie?

Below is a more comprehensive description of Michael's book as well as several reviews it has received.  If  you would like a copy of Still Pitching, it is available at Amazon.com or Barnes and Noble.com or ordered through any independent or chain bookstore.  Congratulations to Michael on his latest contribution to Rockaway history.

Still Pitching tracks the transformation of a short, chubby, Jewish teen-ager who comes of age in the Rockaways in the 1950's. It's about, among other things, his  yearnings for recognition--especially from the popular cliques, his confusions about girls and sex, his fierce desire to pitch for the high school varsity, his passionate attachment to the underdog, Brooklyn Dodgers, and his love of reading and writing.

The book's first half is about growing up in middle class Belle Harbor, going to PS 114, the neighborhood elementary school, and then experiencing the shock of being bussed to junior high at PS 44, in the lower socioeconomic Arverne/Hammels section of the Rockaways.

The second half focuses on the narrator's formative years at Far Rockaway High School, specifically his determination to prove himself both as a pitcher to the hard-nosed coach, Jack Kerchman, and as a sports writer to the more teacherly, Earl Jagust, The Chat's faculty advisor. 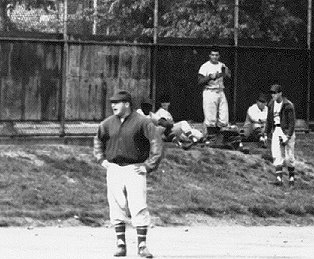 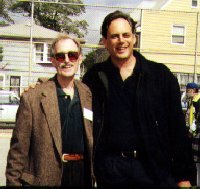 Still Pitching  includes scenes set in familiar locations such as the State Diner, the hallways and classrooms, the school bus, Saturday football games, and school dances--as well as offering up-close views of football and baseball practices and the Chat's layout and editorial meetings.  The heart of the story though, is the narrator's jarring encounters with  coach Kerchman, who over a three year period, challenges the boy to go beyond even his wildest expectations.

Michael Steinberg is the founding editor of the award winning literary journal, Fourth Genre: Explorations in Nonfiction. In addition to Still Pitching, other books include: Peninsula: Essays and  Memoirs from Michigan ( a finalist for the ForeWord Magazine and the Great Lakes Book Sellers Book of the Year Award); the anthology, The Fourth Genre: Contemporary Writers of/on Creative Nonfiction (now in a third edition);  and Those Who Do, Can: Teachers Writing, Writers Teaching--the latter two with Robert Root Jr.  His essays and memoirs have appeared in numerous literary journals and magazines, and his work has been nominated for a Pushcart Prize and cited several times in Best American Essays and Best American Sports Writing. Currently, he teaches in the Stonecoast/University of Southern Maine low residency MFA program.

It’s the ‘50’s in New York, and this wonderfully moving memoir is as deeply committed to place and family and growing up as it is to baseball and its perennial contention club of that systolic decade, the old Brooklyn Dodgers. It’s a memoir about community and friendships both Jewish and non-Jewish, about loyalty, but mostly--and with a prose-style as convincing as the pop of a Sandy Koufax fastball in the catcher’s mitt--it mines that interior territory where the heart confronts its deepest fears and desires, and puts them all at risk, thus creating honest and enduring human tensions.--ForeWord Magazine, September 2003

Michael Steinberg's "Still Pitching" is an insightful and engaging memoir. At eye level it shows that success is the result of perseverance, discipline and heart. At gut level it's a wrenching examination of what it meant to be an adolescent male in the late 1950s.--Milwaukee Journal Sentinel, September 29, 2003

This elegant little memoir presents a middle-aged man's recollections of his coming of age through baseball, friendship, and conflict. The baseball story is itself twofold: the tale of the beloved Boys of Summer-the Brooklyn Dodgers-and Steinberg's own quest to become an excellent ballplayer, one capable of garnering the respect of his coaches and appreciation from classmates, family members, and girlfriends. His touching stories of painful interactions with girls once puberty has taken hold ring true. Equally real are his accounts of deflecting attacks (verbal and otherwise) from tougher, more street smart kids, including at least one of a sociopathic nature. In the midst of it all, Steinberg acquires a love for both baseball and the written word, becoming first a voracious reader and then an eager contributor to school newspapers. The story ends with the once short, pudgy lad acquiring a certain allure to the girls from the other side of town, turning into an overachieving star reliever on his high school team and bemoaning the departure of the Dodgers to Los Angeles. For general libraries.-R.C. Cottrell, California State Univ., Chico  --Library Journal

“Quite possibly my favorite book of the year, Still Pitching is the story of a short, chubby, Jewish teen-ager in Brooklyn in the 1950s and all that implies: hormones, girls, rejection, Dodgers, writing.  It is an astonishing and sometimes borderline voyeuristic look at the pains of growing up.”  --Dan Smith, VWTF, Virginia Public Radio

“With adroit precision and quiet enthrallment, Mike Steinberg leads us into the American Epoch that was New York and baseball in the 1950's. But to say that Still Pitching is simply about baseball is to say that Moby Dick was a good little book about whales.
--Dennis Lehane, Mystic River

Michael Steinberg's book lovingly preserves an otherwise lost time and place; it transports us back to Brooklyn in the 1950s so vividly that we can walk around, gawk, admire and wince.  A copy apiece should go into the collections of the Smithsonian and Cooperstown, but above all it belongs on the bookshelves of all those who appreciate honest, affecting and funny memoirs about growing up.
--Phillip Lopate, Portrait of My Body, Getting Personal and The Art of the Personal Essay