Rockaway Riptides - A Novel About the 60's
by Harriet Goodman Grayson, Class of 1966 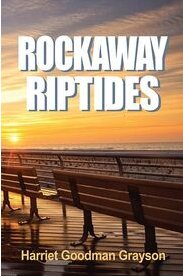 I just released my novel Rockaway Riptides based on my memories and experiences of life as a student at Far Rockaway High School. What has Bob Dylan & Far Rockaway HS & my new novel Rockaway Riptides got in common? The book captures the turbulent 1960’s through the eyes of high school seniors. And what is important for teenagers in the 1960’s – music. The music of Dylan (born Bob Zimmerman from Duluth, MN) is integral to the plot. Remember the 1960’s saw the rise of rock n’ roll. It was in 1965 as the novel opens that Bob Dylan goes from acoustic guitar to electric guitar at the Newport Folk Festival. Everyone wanted to start a garage band as do the characters in Rockaway Riptides.

I wrote the book inspired by the recent unrest in the country. While I was a student, JFK was assassinated, Watts Riots in California and constant protesting against the Vietnam War. In a sliver of a peninsula jutting off of Long Island, the Rockaways felt protected from the raging currents. Living in an isolated part of New York City, the citadel that nourished and sheltered us was Far Rockaway High School.   I would love to hear from former graduates and what they loved most about living in the Rockaways & attending Far Rockaway HS.  I can be reached at graysonharriet@yahoo.com

The book is available from Amazon or www.oceanbreezepress.net