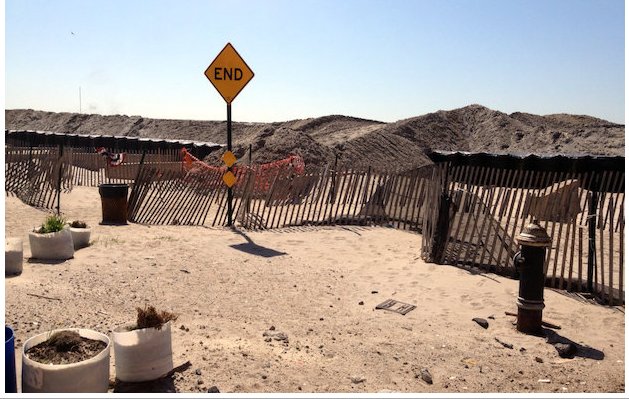 The second phase of the sand project, which will replace roughly 3.5 million cubic yards, began in April after a series of issues delayed the project.

So far, the effort that started at Beach 116th Street in Rockaway Park has added more than 700,000 cubic yards of sand to the beaches, according to the Army Corps of Engineers. A previous phase of the project added 600,000 cubic feet of sand from Beach 89th to 149th streets.

The new sand will require people to traverse dunes that are 6 feet above street level — and rise 16 feet above sea level, Army Corps spokesman Dan Falt said. There will be temporary ramps to help people get over the piles and they will try to "largely match where the old boardwalk access points were."

The height of the sand is a necessary adjustment in order to protect the peninsula, Falt said.

"Residents of Rockaway must reconcile with the fact that for the future, there will be high berms or dunes to provide storm risk-reduction," he said.

Work initially proceeded east, but switched directions after mechanical problems forced it to stop in the Beach 90s, one of the most eroded stretches on the peninsula.

"Due to decreased outflow volume as a result of the increased pumping distance, the contractor temporarily reversed the direction of the sand-pumping operation," Falt said.

The project is now focused around Beach 123rd Street in Rockaway Park, and is moving west at a rate of about one block per day, Falt said.

Beachgoers can anticipate closures of up to 1,000 feet around the project site for Memorial Day Weekend, Falt said.

The Beach 90s area will also be closed because there is not enough sand to support lifeguard shacks.

"Swimming in the Beach 90s cannot be allowed until the Army Corps of Engineers finishes their sand replenishment in the area," said a spokesman for the Parks Department, which referred further questions to the Army Corps.

"With the Corps' current schedule, we expect to allow swimming in early June."

According to the Army Corps, the sand will level off eventually.

Eddy Pastore, 57, a local activist with Friends of Rockaway Beach, said he was "disgusted" by the delays, but was just happy to see something done.

"It's unfortunate, but if we want to get things done we have to tolerate it," he said. "This is going to be a lost summer."

The beach closures are just the latest in a string of issues and delays from the city's multimillion dollar recovery efforts after Hurricane Sandy.

A mile-long stretch of beach was closed last Labor Day for the first phase of sand replenishment.

Three miles of beach will have to wait until the end of summer for sand because of a moratorium that prohibits construction on a stretch where the federally-protected piping plovers hatch.

That beach, from Beach 19th to 73rd streets, can expect additional sand after September, Falt said in March. But that section was not eroded enough to require closure.

The plovers have also caused a delay in the city's boardwalk rebuilding project, which is not expected to be completely finished until Memorial Day 2017.

"Every time I hear the hammer hit the piling, it's progress," he said.