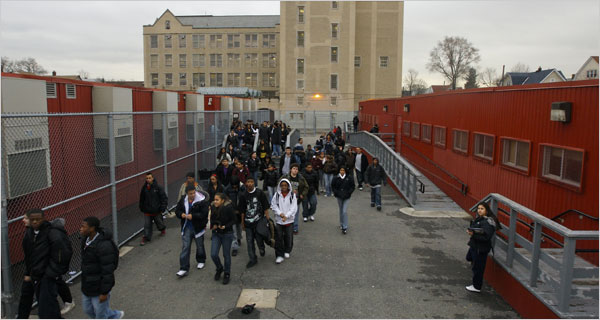 From its brass entry doors to its rooftop observatory to the intricate oak paneling of the principal’s office, Richmond Hill High School in Queens was built to inspire something like awe for public education. The only discordant response during the structure’s dedication in 1923 was whether, with a capacity for 1,800 students, it was too large.

Nobody asks that question anymore. Over the past dozen years, Richmond Hill’s most notable architectural accouterment has been the quote-unquote temporary classroom. Twenty-two of these red metal trailers, encased within chain-link fencing, occupy the school’s former yard, evoking the ambience of the Port Elizabeth container-ship terminal.

As for the cargo, that would be the students, faculty members and staff. Richmond Hill currently holds more than 3,600 pupils, twice its supposed limit, and could have 4,000 next fall as other neighborhood high schools in Queens are broken into mini-schools with smaller, more selective enrollments. Andrew Jackson, Springfield Gardens and Franklin K. Lane have already closed; next year, Far Rockaway will, too.

These days at Richmond Hill, the first lunch period starts at 8:59 a.m., class sizes routinely exceed city and state averages and students have four minutes to negotiate hallways that one biology teacher at the school likens to clotted arteries.

The classroom trailers, never meant for more than a decade of nonstop use, need new walls, ceilings and plumbing. One social studies teacher, Peter McHugh, was reduced last year to conducting class while holding an umbrella against a leaky roof.

To a certain extent, the growing enrollment at the school reflects the influx of immigrants from Guyana and the Dominican Republic to the neighborhood. But more broadly, the problem is the outcome of Department of Education decisions to open scores of small, niched schools in the area, close large ones perceived as academic failures and leave the excess students to land in traditional schools like Richmond Hill that, while relatively successful academically, were often overcrowded to begin with. In this version of education reform, it is never hard to tell the winners from the losers.

City education officials do not dispute that Richmond Hill is severely overcrowded. But they predict that as the department builds and opens new small schools, including several in the Queens neighborhood of Corona next fall, students who might otherwise attend Richmond Hill will choose these options, gradually reducing the overcrowding.

Yet Garth Harries, chief executive for portfolio development for the school system, also said the department was “not in a position to say there is a specific target number, but it is a priority to reduce enrollment at Richmond Hill.”

The students and staff at Richmond Hill painstakingly calibrate their own comments. They cite the school’s myriad classes and clubs as a strength; they do not lay blame on the principal, Frances DeSanctis; and they hold Mayor Michael R. Bloomberg and Schools Chancellor Joel I. Klein responsible for the situation.

“Who decides to treat people this way?” asked Brian Sutton, a dean and special education teacher and a 16-year veteran at Richmond Hill. “You don’t build a school for 1,800 students and stick nearly 4,000 in it. Why? Who would want to do something like that to other human beings? On purpose.”

When Christine Dayao entered Richmond Hill as a freshman in September 2005, she thought the 8:59 a.m. lunch period on her schedule had to be a misprint. “I was freaking out,” said Christine, 16, a junior. “My parents called up the school and said, ‘Is it normal for someone to have lunch that early?’ And they said, ‘At Richmond Hill, yeah.’ ”

To make it through her day, which ended just short of 3:30 p.m., Christine said she “drank a lot of water.” That way, her stomach at least felt full.

THE crowding has only grown worse since 2005. Freshmen take virtually all their classes in the trailers, separating them from the school’s community. When they do walk to and from the main building — for lunch, physical education and science labs — they can easily slip away to cut class.

Within the permanent building, the crowding has created a disciplinary headache. Ninety seconds after each new period begins, deans or teachers make a “hallway sweep” to catch the stragglers. Many of them wind up in detention for little more than having been caught in a human traffic jam.

“Students just have to cope with it,” said Shelleaza Ramdass, 18, a senior. “They don’t feel like they have a choice. That’s what they have to do.”

Richmond Hill received a C grade on its Department of Education report card, and its pupils perform decently on standardized tests. But daily attendance remains at about 80 percent, and the attrition rate from freshman year to senior year is more than 50 percent. It is only fair to wonder how much those numbers reflect the disenchantment or disengagement of students who begin their high school careers in trailers.

Ms. DeSanctis, the principal, has increased team-teaching, particularly in English as a Second Language classes, and has asked the education department to build a direct corridor from the main building to the trailer yard. (She is still waiting for an answer.) It is also possible, however, that next year Richmond Hill will have to extend its class day by one more period so that it will run 7:19 a.m. to roughly 4:15 p.m.

“What I’d love is a brand-new building,” said Ms. DeSanctis, offering her opinion. “What I know is that nobody who has trailers has ever had them removed.”