Down to One Hospital, Rockaway Braces for Summer Crowds 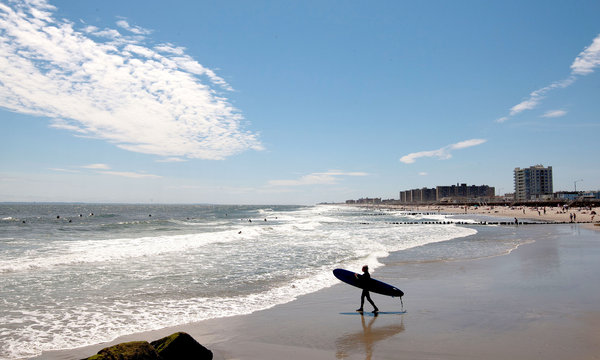 Summer is coming to the Rockaway Peninsula, the thin strip of land lapped on either side by Jamaica Bay and the Atlantic Ocean. And with the warmth will come the usual hordes who play and bask on its beaches, and, inevitably, suffer heatstroke, volleyball sprains, beach glass lacerations and near-drownings — the sorts of seaside scrapes that send people to the emergency room every season.

But this season, there will be one fewer hospital to deal with such traumas.

In April, the troubled Peninsula Hospital Center closed, unable to stay solvent after its lab failed a state exam and was shut down by the New York State Health Department, which said the lab was dangerous for patients.

Much like a reported sighting of a shark fin off shore, the situation has the residents of this beach town frenzied at what may perhaps be an imagined danger. Only St. John’s Episcopal Hospital remains on the peninsula — 11.5 miles long and three quarters of a mile wide — to pick up the slack, serving a large chunk of the 115,000 working- and middle-class year-round residents.

A spokesman for the department, Bill Schwarz, said the presence of local walk-in clinics meant the spit was not in danger. “We are confident that they have the capacity and capability to deal with that increase in the summer population,” he said in an interview.

Communities always reel from the loss of such facilities, but residents here say the topography of their enclave heightens the danger. In cooler weather, the population may be relatively small, but each summer it hosts several million day-trippers: more than 3.6 million people visited the public Rockaway Beach last year during the three-month period it is officially open, which begins this week.

That swell, those who fought the closing fear, may strain the emergency room of the spit’s one remaining hospital to bursting. While there are other hospitals just across the water, the area’s unique geography, they say — it is linked only by three bridges and the mainland at its base, all arteries that jam with traffic on warm days — could ensnare ambulances at times when every second counts.

Peninsula had such a dubious reputation that some residents said they had avoided it altogether. St. John’s asserts that despite a potential upsurge, it can handle the summer crush.

Nonetheless, hundreds of residents and former hospital employees gave impassioned testimony to the contrary before a panel this month at a legally required meeting on the closing; the panel included Dr. Nirav R. Shah, the state health commissioner.

“People are going to die because they won’t get off the peninsula here,” said Bernie Feuer, who runs parking at the beachside Jacob Riis Park. Since 2000 there have been 16 drowning deaths in the waters off Rockaway Peninsula, according to the New York City Department of Health and Mental Hygiene.

“Every summer there are people pulled out of our ocean,” Linda Ruscillo, 63, said at the meeting. “Some make it and some don’t. What are the odds for the ones that do make it but must go to St. John’s?”

Without a functioning lab, Peninsula Hospital was effectively hamstrung, unable to perform a vast majority of services like blood tests or transfusions. Forced to cancel operations, it transferred almost all of the patients in the 173-bed hospital to other medical centers.

“It comes down to patient safety,” Mr. Schwarz said. The State Health Department rejected a plan by Peninsula Hospital to fix the lab. “It has a lab with serious deficiencies,” he said. “They submitted a plan that was unacceptable.”

The loss of most patient income toppled the insecure finances of the hospital, which had already filed for bankruptcy in September.

A trustee appointed by a federal bankruptcy court, Lori Lapin Jones, determined that the hospital’s shaky finances made reopening impossible, Mr. Schwarz said. The hospital’s assets are to be sold in the coming months.

“Given the deficiencies that the state cited, the need for capital, the financial situation, there were insufficient resources in the opinion of the trustee,” said Daniel McMurray, the patient care ombudsman appointed by the bankruptcy court. “It was time to reach that difficult situation.”

As with the painful recent closings of St. Vincent’s Hospital Manhattan in Greenwich Village, North General Hospital in Harlem and Mary Immaculate in Queens, the community has railed against the decision to shut it down.

Voices shook and tears were shed at the meeting this month at the Knights of Columbus Hall. It was held because a recent law requires the State Health Department to hold a public forum when a hospital is closed and report afterward on how the community’s needs will be addressed.

“I wish there was a silver bullet that said, ‘Do this one thing and it will fix the problems,’ ” Dr. Shah said at the meeting.

But just how real the threat is seems in dispute. Even in the summer months, St. John’s does not usually experience an increase in emergency room visits, which average around 100 a day, a hospital spokeswoman said. And there are several urgent care facilities on the strip, like the Joseph P. Addabbo Family Health Center, near the mainland.

Some people, like Adi Carter, 33, a yoga teacher and part-time resident, say Peninsula Hospital, which served a low-income and elderly population, had a reputation for spotty care. Ms. Carter said she routinely administered first aid to wounded fellow surfers in the bungalow she shares on Beach 91st Street, rather than send them to Peninsula, after local firefighters warned her of the hospital’s reputation.

Nevertheless, Peninsula’s absence is being felt. The emergency room at St. John’s, which was last renovated in the 1960s, was designed to serve 15,000 patients a year, but it treats double that number, said Penelope Chin, a spokeswoman for St. John’s. Since Peninsula closed, emergency room visits are up 35 percent. As for inpatient care, about 85 percent of the hospital’s beds are in use, up 11 percentage points since Peninsula closed.

“It’s really unfortunate that Peninsula closed, and we face many challenges here on the peninsula,” Ms. Chin said. “The staff has been caring for the influx of emergency patients as best they can.”