Sad to Report the Passing of Michael Steinberg, Class of 1958

It is with great sadness that I report the passing of Michael Steinberg which was first reported by Alan Frost in a Facebook post on December 10, 2019.  The post contains many thoughtful comments and memories of Michael.  As I have been away for the past few months, I am sorry for taking so long to post this information.  It was on October 8th that I received an email from Mike informing me of his latest book entitled, Elegy to Ebbets.   The letter reads as follows:

Hi Skip,
In 2003, I wrote a memoir Still Pitching about growing up in the Rockaways in the 1950s and attending FRHS and you were kind enough to promote the book on the FRHS website. I just published new book of essays, Elegy For Ebbets, published by Pint Size Publications. It is about growing up in the Rockaways in the 1950s as well as referencing the Brooklyn Dodgers of the 1950s. If you would like to announce it on the web site I have enclosed a cover photo (art by Carole Steinberg Berk class of 1960) and the book can be purchased on Amazon Prime.  All the best, 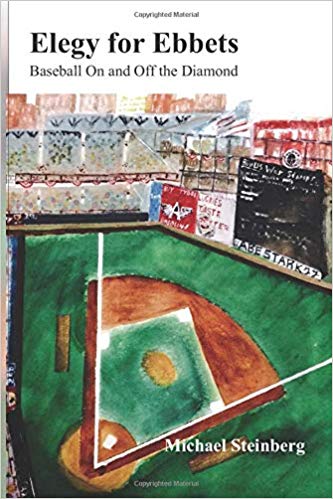