Many of our fellow classmates were not aware of the efforts underway to raise money for Far Rockaway High School.  Shortly before the 100th Anniversary Reunion in 1997, a separate group organized in an effort to help raise badly needed funds for the school.  They were appalled at the condition of the school and football field and set about to assist the school through a fundraising effort.  Susan Gottlieb Beckerman, Class of 1963 chaired the committee and came up with the idea of 'purchasing' a seat in the auditorium.  Below is Susan's update on the fundraising effort.  I want to personally thank Susan for an extraordinary job.  She saw a need and set out to do something about it.  With the help of those who gave, she was able to contribute $52,500 to the school.  Here is her update! 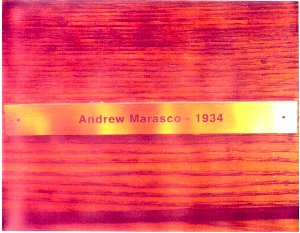 As this is written, the first phase of the effort to raise funds from FRHS alumni to support the current students, is finally reaching a conclusion.  The physical manifestation of this achievement is the affixing of the names of about 200 donors of at least $100 on seats in the FRHS auditorium.  Completion of the installation of the plaques is expected in time for commencement exercises on June 26, 2001.  The photo to the left shows one of six plaques ordered by Joe Marasco, honoring his parents and their four offspringall proud FRHS alums.  After the plaques were installed, Joe flew in from California and accompanied his father Andrew Marasco, Class of 1934, on a trip to the high school to celebrate his 85th birthday.  Click here to read about Joe and Andrew's visit and see some wonderful photos Joe took of the occasion.

Four years ago, in anticipation of the 100th Anniversary Celebration, a group of alumni decided that we wanted to give back to the school that meant so much to us. We knew that others would want to do the same.  Reports from those who had visited the school and the surrounding neighborhood painted a bleak picture, and it was clear that the school could use help to give the current students just a fraction of the benefits many of us hadespecially those of us who attended in the 1950s to the 1970s, a golden age of public education in New York City.

An important first step was to secure a matching grant from a prominent alumnus.  Carl Icahn, 51 promised to match ever dollar donated, up to $50,000.  We also came up with a hook for our appealfor a donation of $100 your name and year of graduation would be affixed to a seat in the FRHS auditorium.  We prepared a campaign kick-off pitch to be made at the assembly scheduled during the Anniversary weekend.  We even printed up donor cards and envelopes to make it easy for eager alumni to send in the cash!

The events of the Anniversary weekend as well as seeing and meeting some of the current kids strengthened our desire to find a way to help.  The school building that day was decked out to greet the returning alums, the football team cooperated with a win over rival Adams, but the shabbiness of the auditorium seats & curtain, the deplorable condition of the football field, even the lack of musical instruments the kids entertained with an upbeat clapping & stomping routinecontrasted with our memories of a school well-equipped and with a variety of enrichments in sports facilities, performance opportunities, publications, etc.

Unfortunately, although more than 5000 people attended the all-class reunion and enthusiastically celebrated their high school years, the fundraising effort did not get off to a great start.  The group responsible for the wonderful Anniversary Celebration did not want to use the occasion for raising funds for the school.  The printed material was not made available during the weekend.

The fundraising group decided to launch the campaign by mail.  It took quite a while to obtain the mailing list.  By the time we were able to do our initial mailing, momentum had been lost, and, unfortunately, the mailing lists were out of date and inaccurate. Nevertheless, we were able to raise $28,275 from about 250 generous donors.   The Icahn Foundation matched this amount. Some donations were small--$10 or $15; some were largeat least two leadership donations were for $5000!  But every dollar donated was matched and had double the impact.

During the year 2000 we were able to send a total of $52,500 to the school. The difference between funds raised and the funds donated included the costs of printing and mailing plus leaving a small reserve to maintain our bank account.  A generous donor underwrote the costs of producing the name plaques, ensuring that more money would be available to support the school.

There were two small grants to the school to meet prior commitments for certain football equipment and to fund a prize for an accomplished graduate.  But the major grant,  $50,000, was sent in December 2000.  These funds were used to purchase computer hardware and software for the library and computer room.  These acquisitions significantly upgraded FRHS students access to technology that their peers all over the country take for granted. The then-principal, Tom Cunningham, contacted the fundraising group to express his appreciation and that of the schoolhe called our donation a miracle in a season of miracles.

The fundraising committee intends to resume activities in the fall. We will confirm that Carl Icahn is willing to continue his matching grant.   We plan to raise at least $22,000 so that we can make use of every matching dollar available.  Please consider giving this time around. There are enough seats in the auditorium to install another 500 plaques.  There are many worthy uses for the funds we will raise, to enhance the educational opportunities for the students of FRHS.  Gifts of any size are welcome and many small gifts do add up.  But, if you can donate $100 or more, you will not only achieve immortality by having your name on that auditorium seat, but also you will have the joy of knowing that your donation has made an important difference in young lives.

If you want to make a donation, please contact me, Susan Gottlieb Beckerman, 63, at 32 West 88th Street, NY 10024 or write me at sb1118@aol.com.  We will welcome your help, especially if you are able to assist in locating lost alumni and in conveying your enthusiasm for our efforts to your lifelong FRHS friends.