Rockaway Memorial Dedicated To
The Victims of 9-11 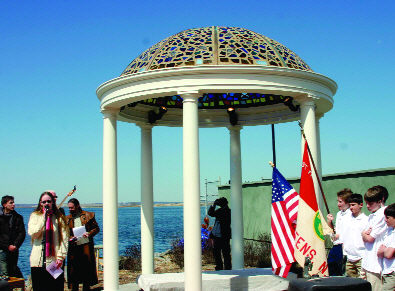 Nearly five months after Rockaway Tribute Park was dedicated to the local residents who died in the terrorist attack on the World Trade Center in 2001, the final piece fell into place as local artist Patrick Clark unveiled his modernistic glass cupola last Sunday. Under sunny skies, the cupola, with 57 names sandblasted into glass stars, was revealed for the first time to hundreds of family members and community supporters who gathered on the Beach 116 Street site to remember those who died.

The park offers a view of the empty vista where the two buildings of the World Trade Center once stood across Jamaica Bay. "This is not a place of sadness, it pays tribute to their lives rather than their past," Liz Sulik, the former executive director of the Rockaway Chamber of Commerce who helped conceptualize the park, told reporters. The stone and glass cupola is made up of 10 panels of faceted glass and Swarovski crystals.  "The significance [of the cupola] is to remind us of light's transformation into our presence and their lives in our lives - a light shines down from the heavens," Clark told reporters.

The unveiling included musical presentation by locals such as Gerald Bair, who sang "This Changed Everything," Caitlin Hynes, the daughter of FDNY Captain Walter Hynes, who sang "Somewhere Out There," and Joanne Marnick, who sang "The Wind Beneath My Wings."

Robin Peterson, the wife of Billy Peterson, who was killed in the attack, read a poem about her husband. Ash from Ground Zero was spread by family members around the site and there was a Native American Smudge Blessing performed by Bob "Little Bear" Clark of the Umatilia Nation.

Each family member was called to the dome by Clark, who pointed out the star in the cupola bearing the name of their deceased relative.

Several hours after the unveiling, Clark and many of the family members present for the 1 p.m. unveiling came back to the park to see Clark turn on the cupola's internal lighting system, which illuminates the names. The park, which cost nearly $700,000, most of it raised through private donations, is maintained by the Parks Department and is be open daily.

Sean Heeran, whose brother Charlie was a bond trader for Cantor Fitzgerald and was killed in the attack, told Daily News reporter Warren Woodbury that the cupola is "perfect." Charlie's name is on the top of the dome, right next to my brother-in-law, Firefighter Richie Allen, who my wife lost. I don't know if they planned it this way, but it turned out to be really nice."

"It took a long time for Clark to get it done," a long-time resident told The Wave. "But it was worth waiting for."